Difference between revisions of "How to play"

Note that this document only covers the basics of software operation and configuration. To see how to play Doom from a gameplay standpoint, please see: Gameplay 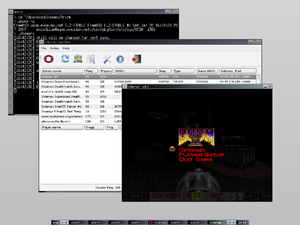 Joining a game on FreeBSD 6.2

If you'd like to start gaming, then open up the "odalaunch" application that is in the directory to which you installed/unarchived Odamex. This is the Odamex launcher, which queries the master server and lists the public Odamex servers that are currently running.

After the application loads, it should automatically fetch a list of servers from the master server. If it doesn't, click on the appropriate button on the toolbar. Then, whenever necessary, you may refresh the server list by clicking on the respective button. However, if you would like to refresh an individual server, then highlight it by clicking on it once in the server list, and then click the button for refreshing a server. To play, simply click on a server that you'd like to play on and hit the launch button (the leftmost button). It is a good idea to pick servers with a low ping (latency), usually below 150 milliseconds, although different users have different levels of tolerance for high latency. Playing on a server with a low latency will result in a smoother and more accurate game.

The client will check the waddir commandline parameter and the DOOMWADPATH environment variable for WAD paths (both can contain multiple, semicolon delimetered paths, e.g. "c:\wads;c:\odamex"). The client will automatically find and load the appropriate wad when connecting to the server.

If you do not have the required PWAD(s) that a server is running, you do not have to worry most of the time, as GETWAD will automatically search for the needed PWAD(s) once you decide to connect to the server. Some PWADs will not be found if they have either not been uploaded anywhere at all or have not been specifically uploaded to the addresses that GETWAD searches.

If you are playing under Linux, it will search your $(HOME) directory (usually /home/*usernamehere*) for IWADs and PWADs. Please note that in Linux, filenames are case sensitive meaning that files called "DOOM2.WAD" and "doom2.wad" are two seperate files. For best results it is recommended to keep all wad files lowercased.

To customize and adjust your game controls to your own preference, then have Odamex up and running and select options on the main menu and then select customize controls. There, you'll see a list of different actions with their corresponding and currently set controls. To change a control for an action, just navigate up and down with the arrow keys and press enter once you reach the action for which you'd like to change the control. Then hit what key you would like to replace the current chosen control. To clear it, hit the backspace key.

There are many options besides game controls that are available for configuration. There are the display options, which can be found after having selected options in the main menu. These options pertain to rendering. There is also the option of adjusting one's video modes that can be located after selecting options on the main menu. One can adjust his or her resolution to suit his or her desires. Also, there is a mouse setup option, where you can precisely tune your mouse sensitivity.

Odamex supports a fair share of the essential game types offered by the FPS genre:

Deathmatch (DM), commonly also called Free For All (FFA), is a game mode where the objective is to attain the highest amount of frags and reach the set fraglimit, while facing one or more players. It is the most basic and played game mode.

If you'd like to be given a break and shift your focus from fighting a plethora of players at once onto battling a single individual, then Head to Head would be the perfect choice. Head to Head, commonly referred to as 1-on-1 or duelling, is a variant of deathmatch where the amount of players playing simultaneously is limited to only two, hence the name "Head to Head". The objective is the same -- to rack up the highest quantity of kills, yet only against one adversary. This game mode particularly allows for high competition among individuals and many tournaments center on this game mode.

This is the ideal game mode if you would like to still fight a horde of players yet have some allies back you up. Team Deathmatch is a team-based variant of deathmatch where players are divided into teams determined by color; traditionally blue and red teams. The goal is overall the same, yet a whole team must achieve a higher amount of kills than another team.

A highly popular and addictive game mode, Capture the Flag, or CTF, draws attention to strategic and team-based gameplay. Capture the Flag, like Team Deathmatch, is a team-based game mode, where two teams, distinguished by the colors red and blue, fight each other. However, the objective is not to rack up the highest amount of frags. Each team has a base with a flag in it that is of the same color as the team to which it belongs (e.g. the red flag belongs to the red team). One team has to capture the flag of the other team while it is still in possession of its own flag (e.g. the blue team has to capture the red team's flag while it still has its own flag and vice versa). Then, the team has to bring the flag to its base to where its own flag is to score a point (the blue team takes the red flag and brings it back to its own base to where its own flag is situated, so it can score). If the team's flag had already been taken, then it cannot score until its flag had been returned (if the red team had already taken the blue flag while the blue team has the red flag, then the blue team cannot score unless its flag is returned and vice versa). To return one's team's flag, the person who is holding the flag has to be killed.

Specifically designed for this game mode, there is an official Odamex map-pack that is titled "odactf1.wad".

If going against other players isn't your style, then you can always battle against the monsters with other players on single-player maps. In cooperative games, players work together to complete the level and any existing subsequent ones. When a player dies, he or she starts back at the beginning of the map without any keys, items, or weapons that he or she may have acquired on that same level, unless the server has such settings that allow for players to keep their keys, items, and weapons upon respawning.